The genes of the white spruce mitochondrion 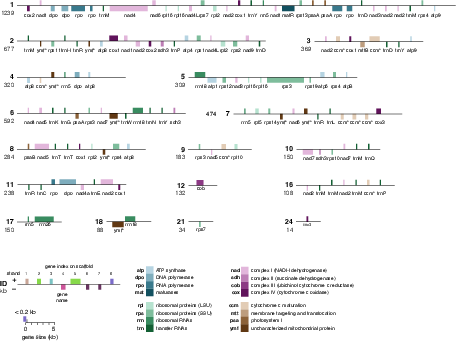 My research looks at decoding the genes of the cellular components involved in photosynthesis and energy conversion of the trees grown for softwood lumber, called conifers. Conifers such as spruce, pine and fir are the primary product of the Canadian lumber industry. As lumber they are mainly used for building homes and are an important part of the Canadian economy. A cell has inside it small components named organelles that each perform a particular job. The organelles called chloroplasts absorb light and produce sugar, and this process is called photosynthesis. The organelles called mitochondria are responsible for converting sugar to a form of energy called ATP that is usable by the other organelles of the cell. Most genes of an organism are found in the nucleus of its cell, but the chloroplast and mitochondria have their own genes that are separate from the nucleus. My research will determine which genes are found in the nucleus of the cell and which are found in the chloroplast and mitochondria. This knowledge is helpful in breeding stronger trees that may be more adaptable to climate change or more resistant to insects, such as the mountain pine beetle that recently devastated large forests of British Columbia. Breeding trees that are more adaptable and pest resistant is critical to ensuring the health of our forests and maintaining a prosperous forestry industry.